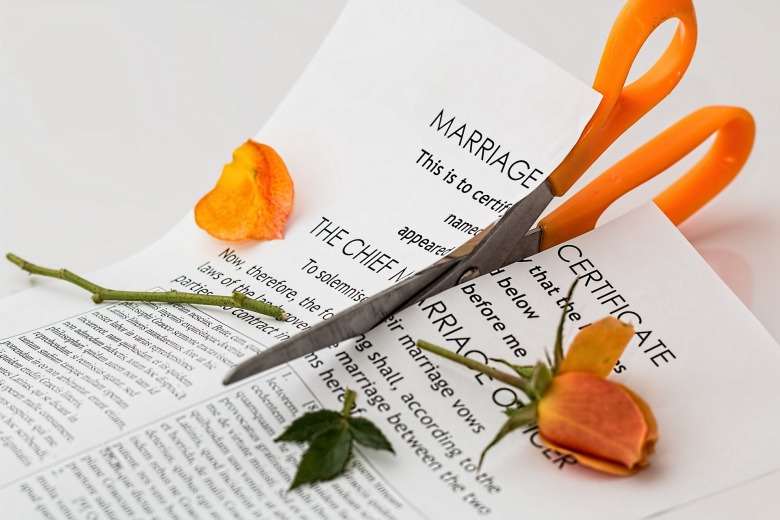 This past weekend I was engaged in a conversation with some friends about marriages and why they fail.  It became quite a heated discussion as we all shared our own views.  Those who are actually married or have been married had the most to say based on their experiences.  “Nobody prepares you for what marriage is really about.  They don’t tell you that it’s actually very hard,” Nancy* said.  What she said is so true.  From the time we are children we are sold the fairy tale that everything is a ‘happily ever after’ ending.  When we watch movies or television they always present the idea of the ‘wedding day’ but rarely the concept of a marriage.  From what many married people have said to me, marriage is hard work and takes a conscious effort because you are now living with another adult with their own sense of self.  The idea of compromise is difficult for some especially because it means relinquishing a part of yourself or letting go of your pride.

We live in a time when getting a divorce is much easier than it was 30 years ago.  We’ve also become a society that wants what we want, when we want it.  Everyone wants to be right all the time.  According to statistics many countries continue to see high divorce rates.  The United States has a 53% divorce rate while countries like Spain, Portugal and Czech Republic have an over 60% divorce rate.  Many countries in Africa, South America and South Asia don’t have any accurate stats on the rate of divorce, but from social changes divorce is becoming something more common even in places where it is still taboo

What are the reasons marriages are failing at such a high rate?  There is no single answer, but there seems to be commonalities in many situations.  Some can be averted, but people choose to walk away instead of working it out.

Here are ten reasons that a marriage might fail.

1. Getting Married Before You’re Ready

This often happens in cultures where expectations are set high as to when you should be married.  For example in many African cultures, parents and elders immediately begin asking, “When are you getting married?” to young people immediately after they have finished school.  It’s deemed that you haven’t accomplished anything until you have married and started a family.  This is particularly true for women who are often pushed into marrying before they are even ready.  The cultural and social expectations are so high that people will marry just for the sake of getting married.  Before they realize, they are in a marriage with the wrong person and unhappy.

This is not exclusive to certain cultures.  There are many reasons people get married before taking the time before they are ready.  Sometimes those first few months of dating are so exciting that you believe you could spend the rest of your life with him or her and get married too soon (This is not to say that there are no success stories of those who married quickly. The large majority of fast weddings are not as successful as the couple hoped).

People who get married at a very young age can face some of the biggest obstacles because they still haven’t figured themselves out yet.  Barely finishing school, starting jobs and dealing with financial issues are all new to young adults and to deal with that as a married couple brings a great deal of stress to a relationship.

Also as we mature, people often evolve and change at various stages of life.  This can present a great deal of challenges when a person says that their partner has “Changed and isn’t the same person anymore.”  This is because who you married, is the person they were at that stage in life.  If a couple doesn’t consciously decide to go on life’s journey together and grow in the same direction, it’s very likely they will divorce as they become different people.

They say that comedy is often a reflection of real life and most comedians have made a joke about the in-laws at some point in their career.  There’s actually a website dedicated to expressing the negative experiences with in-laws called I Hate My InLaws.  It’s no laughing matter when a couple is deeply affected by in-laws that are constantly scrutinizing their relationship or meddling in matters that don’t concern them.  In an article titled, Outlawed by Your In-Laws,  written by Dr. Lynn Margolies, a psychologist, she reveals how marriages can be broken down when boundaries are not set with in-laws.  It’s easy to be caught in the middle of managing your parent(s) and wanting to side with your spouse.  The big problem arises when a husband or wife doesn’t defend their mate and allows their mother or father to say things that are hurtful, intrusive and disrespectful to the marriage.

While dating it’s easy to get lost in the romance and bliss of being with someone.  Before you get serious and start talking about a life together couples should share their life goal and vision.  This plays an important factor in knowing if you’re truly compatible or if you’d have a successful marriage.  I know someone who married a man from another country and assumed that man wanted to move to where she lives.  It was after getting married that she learned he had no desire to leave his cushy job in his home country.  She on the other hand assumed that his love for her meant he would move without question.  Now she has compromised and is living somewhere she doesn’t want to for the sake of the marriage.  A situation like this is filled with tension because she could end up resenting him because she is stuck somewhere she doesn’t want to be.  It will only be a matter of time before things may go from bad to worse.

Always discuss matters of importance before you take that walk down the aisle.

Money is known to be one of the biggest factors that cause serious damage to relationships.  When one spouse earns more than the other and feels like they are carrying the weight it can breed a sense of resentment.  The bigger problem is usually with mismanagement of funds.  When one partner doesn’t manage the finances the same way the other does it can be a source of contention which leads to arguing.

People don’t usually talk about things like money, credit history and debt before getting into a marriage.  However, it is so important that all these be discussed during the early stages of a relationship because the way one person handles money can be cause for disaster in a marriage.

Temptation is something that has been with us since the beginning of time.  Once a spouse gives in to temptation and has an emotional or sexual relationship outside of the marriage it’s usually the beginning of the end.  A cheating spouse has broken the trust in the marriage.  Without that, the relationship is likely on the road to disaster.  There are some couples who try work things out with forgiveness, but typically because the foundation has been broken things are never the same.

It takes a level of commitment and hard work to keep from straying.  Both partners must be willing to do things to keep the marriage alive.  Boredom in the same routine day in and day out can lead to a cheating spouse who is seeking excitement outside the marriage.  In a society where adultery is celebrated in tabloids and in music it can be very difficult for someone who may be easily tempted.

A lack of communication is one of the biggest problems that can lead to divorce.  Sometimes couples forget that a relationship is about talking to your partner.  Your spouse should be the first person you discuss important matters with.  It’s also critical that you never assume your spouse knows how you are feeling.  Sometimes what we are thinking is not so obvious to the other person.  They could be completely oblivious that something they said hurt you until you actually express that to him or her.  Be open and honest about everything.

Communication style is also another obstacle.  If one partner tends to always share their feelings and thoughts, while the other is closed and private that can be a major challenge.  Understanding each other’s style of communication is the first step.  Once you know how he or she communicates you should talk about it.  Let it be known what you need in order to feel like your spouse is listening to you.

All too often when a couple gets married there is one partner who doesn’t like the other spending time with their friends or doing hobbies that don’t include him/her.  It’s important in a marriage to maintain a sense of who you are and keep your friendships.  That doesn’t mean you spend all your free time with others and not with your spouse, but rather having a balance.  Alex* spoke of the differences in the lives of single and married men saying, “All my married friends have to come up with excuses when they want to spend time with the boys on the weekend.”  I asked what he meant and he said because when they tell their wives they want to go chill with their buddies on a Saturday afternoon they are not too happy about it and often forbid them to.  Once they are forbidden they feel trapped and come up with excuses like, “I’m going to the mechanic to check something on the car.” in order to slip away and hang out for a drink with friends.  When the excuses or lies start that’s a big problem.

A person suffering from abuse in a marriage is often afraid to leave for various reasons.  However it’s one of the major reasons a marriage ends.  In cases of a physically abusive spouse, there is often an element of control and fear used to scare him/her so it may take longer for the person to leave, but more and more they are leaving.

Emotional abuse eats away at the core of the relationship and the person’s sense of self-worth.  This is also a form of power and control over another, but more often people are divorcing because they have no desire to stay with someone who is not a loving person.

When someone comes from a home where they saw their parents troubled relationship, it’s likely they too will divorce.  According to a written study from Utah State University, How Common is Divorce and What are the Reasons?, when one spouse experienced divorce with their parents it doubles their chances of also divorcing.  When both came from homes of divorce, the chance for divorce triples.  A stronger effort is needed in these cases to keep from following the same path.

*Names have been changed to protect identities.