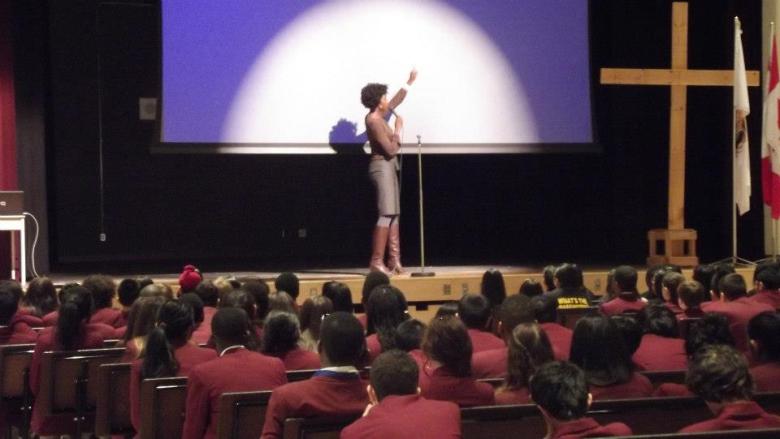 Since 2004 Ivy has been speaking to young people about issues of body image, self esteem and confidence.  She’s spoken with the Bulimia & Anorexia Nervosa Association in Essex County, toured across Eastern Canada with Kids’ Help Phone and travelled several schools in Canada with the 411 Initiative for Change.  She also created her own seminars speaking to young people, especially girls, about the power of media influence on their self-esteem and image issues.  Last year Ivy was a speaker at the Young Women in Programming event in Accra, Ghana where she spoke about the ‘Role of Social Media in the lives of Young Women’.

Beyond these issues Ivy has been hired as a live Host/MC for various events including the Africa Fashion Week Industry Awards night, Panel Discussion for Power to Girls Foundation and a Fashion Zone Runway show supporting young artists and designers in the community.

HIGHLIGHTS OF PAST EVENTS

Touring around southern Ontario at several schools speaking to girls from grades 6-12 on issues of self-esteem, body-image, bullying, media messaging and career goals.

Ivy has been a featured speaker at various ‘Girls’ Night In’ events at high schools.  It’s a fun filled day after school where she talks about issues on women’s body image, the media and self-esteem.  It’s an interactive, engaging presentation targeted and young women age 14-18.

This was a weekend filled with teaching teenagers about skills needed to succeed in life.  Workshops on public speaking, business planning, career goals and communication skills were the focus of this weekend.  It took place at Alpha Beta School in Accra, Ghana, West Africa.  A selected group of students were a part of this pilot project.

This tour travels through schools in Southern Ontario and the Greater Halifax, Nova Scotia Region.  Kids Help Phone is a non-profit organization dedicated to assisting youth ages 5-20 with any issues they are dealing with over the phone or online.  The purpose of the tour takes Ivy and a KHP Counsellor to schools to discuss issues concerning Canadian youth today.  It’s an opportunity for Ivy to also share personal stories of encouragement to the Junior and High School students on the tour.
Camp AfroChic

Camp AfroChic is a non-profit organization dedicated to empowering and teaching young Black girls about embracing themselves and cultures.  It is a weekend filled with activities, workshops and field trips with young girls from marginalized communities.  It was an event filled with opportunities to grow, learn and embrace who they are and recognized that they are women of the future.  It is an open forum that allows each girl to express herself in a safe environment.  As one of the facilitators of the weekend Ivy speaks to the girls on issues of self-esteem, body image and embracing their natural beauty.
The 411 Initiative for Change

The 411 Initiative for Change uses art, media and culture to raise awareness about social issues concerning young people.  It’s goal is to empower youth and help them to develop within their communities to create change.  The program travels to schools to interact with young people and help improve their understanding of various issues that are both global and domestic.
Ivy joined The 411 Initiative for its tour with Actress Anita Majumdar and Rapper/Musician Masia One in March-April 2011 tour through schools in Ontario speaking to young girls in elementary schools on issues of self-esteem, bullying, discrimination and integration.  The program uses media, music and dram to teach the girls valuable lessons in life.

Ivy joined The 411 Initiative for its tour with Actress Anita Majumdar and Rapper/Musician Masia One in March-April 2011 tour through schools in Ontario speaking to young girls in elementary schools on issues of self-esteem, bullying, discrimination and integration.  The program uses media, music and dram to teach the girls valuable lessons in life.

This event is designed to help uplift and empower young girls who otherwise aren’t always exposed to positive images of women.  Geared towards girls ages 12-19, this conference is all about recognizing your inner strength and learning to evolve.  Ivy Prosper was a featured speaker on fashion, media and self-esteem for young girls.

Ivy Prosper was a featured speaker at the National Health Show in Toronto, Ontario.  This is Canada’s largest consumer show on promoting your health; mind, body and soul.  She will be speaking on self-esteem as it relates to the media.

The YWCA’s Power of Being a Girl Conference is an initiative aimed at giving young girls the confidence and strength to navigate through life.  Ivy was a featured speaker at the conference October 18, 2012 at Bingeman’s Conference Centre in Kitchener, Ontario.  She spoke to over 500 young women at the conference that day.